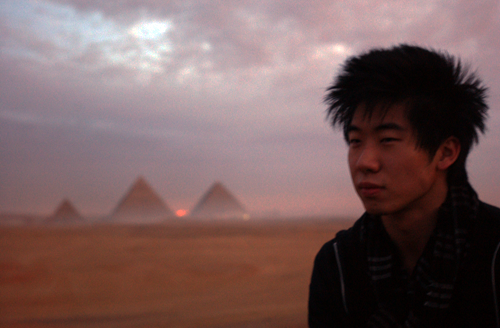 When he was 6 they called him chink. When he was 8 his parents enrolled him into SAT prep courses. When he was 10 he bartered for friendships by doing other people’s math homework.

It’s tough growing up a stereotype. But when the rebelliousness of puberty hits and you take on some holy war to break these stereotypes, you think you’re freeing yourself from the trappings of society. By the time you think you’re in the free and clear, however, a cancerous self-awareness compels you to question whether repressed childhood traumas have become the motivating factors for your accomplishments. Will we ever be truly free?

So prepare for an onslaught of musings through the eyes of an Asian American observing (and taking part in) this insane world of perpetual change. Prepare for questioning the Asian American “‘ism”, on what it means to be a minority today, on the strategy for coalition building, on the meaning of stereotypes, on what is right and what is wrong (if there is such a thing in the first place), and the careless arbitrariness of human perception and discrimination. Prepare for thoughts from a humbled world traveler and arrogant New Yorker, from a skeptic and a hopeless romantic, from a stereotype basher and a future Asian American doctor, from an Ivy League graduate and a state school scholar, from a socialite and a nerd, and from an individual who yearns to transcend the disparate checkboxes of his identity.

“It is only through extremes that men can arrive at the middle path of wisdom and virtue.” – Wilhelm von Humboldt