Are you a woman who played sports in high school or college in the 1980s, 1990s, 2000s or who went to college or graduate school in the 1980s, 1990s, or 2000s? Are you a female college student or do you know someone who is a female college student or female athlete?  If so, then there’s a woman you should be thanking for the passage of Title IX.  While most people have probably heard of Title IX and think of its main application in terms of providing equal access for girls and women in high school and college sports, many people may not know that (1) Title IX was actually proposed with the idea of equality of education for women and covers 10 areas, including equality in sports (2) The principal architect and sponsor of this bill — a bill that was subsequently renamed in 2002 to honor this congressperson’s achievements, is Patsy Mink. 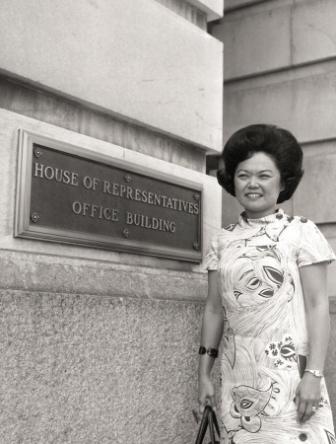 Patsy Mink was an extraordinary woman.  She was born Patsy Matsu Takemoto on December 6, 1927 and grew up on a plantation in Maui, Hawaii (although it should be noted that her father was one of the few college-educated plantation employees — he was a land surveyor — and received a very good salary, certainly better than the laboring plantation workers in the fields).  Mink wanted to become a doctor, but found that a combination of sexism and racism barred her from medical school.  So she got a law degree from the University of Chicago, but subsequently found that a combination of sexism and racism prevented her from being hired in both Chicago and Honolulu.

[Mink was one of 2 Asian Americans and 2 women in her graduating class–she also met and married her John Mink, a graduate student in geology, while at U of Chicago]

So Patsy Mink got involved in politics.  And while the path to Congress would take too long to recite in this column, the important thing to know about Patsy Mink is that she became one of eight women in the House of Representatives and, most significantly, she was the first woman of color, the first Asian American woman, the first Japanese American woman, to serve in Congress. There is a documentary, Patsy Mink: Ahead of the Majority, that details the life of this iconoclastic woman (click here for the link to the Independent Lens website and here for a link to the filmmaker’s website).  A woman who was a true liberal lion.  Who spoke out against the war in Viet Nam.  Who fought on behalf of women and poor people.  Who always spoke up for what she believed in, even when her opinion was a minority opinion and not well received.  She was one of the 66 people who voted against the Homeland Security bill post-9/11.  And, as noted in the beginning of this post, she fought for equal access for women in higher education–because Title IX forced colleges and universities to open up the admission process in graduate and undergraduate admissions to women, enabling the current equity we now see for women entering medical and law school.

June 23, 2012 marked the 40th anniversary of the passage of Title IX, and I am a direct beneficiary of its passage.  I am a direct beneficiary of the legacy that Patsy Mink left in terms of her public service, in terms of her fighting for social justice, in terms of her breaking down barriers and showing up as an Asian American woman at a time when that phrase “Asian American” wasn’t even in existence and when a woman’s place was believed to be in the kitchen not the halls of Congress.  Title IX expanded educational access for women–I don’t know the faces or names of the countless women who have been impacted by Title IX, but I do know the face of one woman who was key to its implementation. Patsy Mink at the Democratic Convention, June 2002–she would pass away from complications due to pneumonia 3 months later.

November 6, 2012 is election day.  I hope that everyone who has registered to vote will go out and exercise their right to vote, because Patsy Mink dedicated the majority of her life to public service and doing her civic duty.  The least we can do is to show up to the polls in honor of this extraordinary Asian American political pioneer: Patsy Mink. Campaign button from Patsy MInk’s 1972 presidential campaign–she ran in the Oregon primary as the anti-war candidate, becoming the first Asian American to run for the office of the president.

Empowering Women Entrepreneurs: Angie Chang of Women 2.0
Retrofit Republic: Finding a Style of Their Own
Introducing Jennifer Ho: Dispatches from Asian America
Like us
Follow us
Subscribe