Dispatches: Asian Americans on T.V. or Why I Still Love “Flower Drum Song” The answer to this question is unknowable in many ways–at least not knowable by me since I’m neither a political analyst/strategist nor a political scientist.  On the face of it, it would seem that if Asian Americans don’t feel that their concerns are being addressed by either candidate, then perhaps they won’t show up to vote.  Of course I’m also am not sure that Asian Americans vote at lower rates than any other racial groups or the national average.  But the question about representation got me thinking about the literal representation of Asian Americans in popular culture.

[Two of the most visible Asian American characters to grace the silver screen, Kumar (Kal Penn) and Harold (John Cho) of the Harold & Kumar film franchise.  As a friend once said, you know you’ve made it when your racial group gets their own stoner comedy.]

[Aside 1: Sometimes I also add Latino and American Indians, but if I’m short on time, I stick to these three since our current discussions of race, at least in popular discourse, focus on white and black Americans–the Asian American category is important for the purpose of this exercise and the point of this post.]

Students have no problems coming up with the first two categories–they readily list former presidents, actors, musicians, historical figures, and athletes for both white and black Americans.  Although I should add that aside from President Obama, former presidents dominate the white rather than black or Asian American categories, and athletes and musicians often make up the bulk of responses for the black American category.

The real test comes with the Asian American category.  The crafty students will list the authors on our syllabus, but the majority of students either have only 1-2 names listed or they have mainly Asian actors and actresses filling out their list: Jackie Chan, Jet Li, Michelle Yeoh, Zhang Ziyi–although sometimes they do have Kal Penn and John Cho listed as well.

[Aside 2: Of course if I were to do this exercise now I bet the number one person on everyone’s list would be Jeremy Lin!] 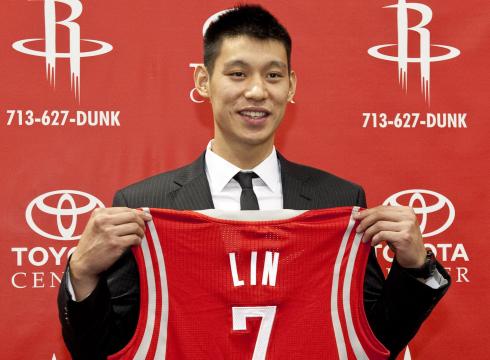 [I’m sure at some point I will write a whole post on the phenomenon known as Linsanity and the awesomeness known as Jeremy Lin.]

The point of the five famous Americans exercise is to show students that who they think of as “famous” is a racialized exercise in who they see representing various races in mainstream media.  Our history classes teach us about famous Americans, white Americans, all the time, and contemporary entertainment now features many people of color in film and television (albeit often in secondary or background roles).  And certainly in mainstream sports, African American athletes are now very prominent.  But the fact that students struggle to distinguish between Asian and Asian American actors and that they generally can’t name anyone outside of the sports or entertainment industry (no Norm Mineta, Patsy Mink, Yuri Kochiyama, IM Pei, Larry Itliong) speaks volumes about the lack of representation of Asian Americans in popular culture and mainstream media.

At this point I know I’m preaching to the choir.  If you are an ALIST reader, you already know that Asian Americans are under-represented in popular culture, mainstream media, and our political parties.  We’re even under represented in the one area you’d assume we’d kick ass in: education.  We are not over-represented among college and university deans, provosts, presidents, and chancellors.  So much for the model minority myth–it’s hard when you keep bumping your head against the bamboo ceiling.

Which is one reason why I will forever have a soft spot in my heart for the 1961 Rodgers and Hammerstein musical Flower Drum Song.  When I was growing up in the 1970s, every year our local Bay Area station, the one that played old movies on the weekends, would run Flower Drum Song.  And every year I’d look forward to watching Nancy Kwan sing about how much she enjoys being a girl and James Shigeta having to choose between Chinese American bad girl Linda Low and Chinese immigrant good girl Mei Li.  Flower Drum Song is a problematic musical on so many levels (think really bad ethnic stereotypes and sexual politics), but I cannot deny the power of seeing people, if only once a year, who looked like me on television–seeing people who could sing and dance and fall in love–in largely unaccented, American standard English. 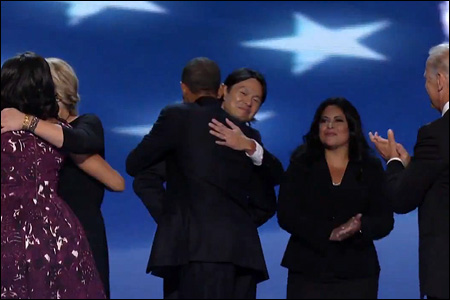 It’s the 21st century.  There should be more Asian American representation.  I’m not sure how to make this happen, but I know that I don’t want my own kids to grow up looking forward to re-runs of Harold and Kumar on Comedy Central every year because that’s the only time you get to see Asian faces on t.v.

Tags:
Asian Americans in public lifeHarold and KumarhomepostJeremy LinKamala HarrisKonrad NgLarry Itliong
« I Am An Asian Man And I Am Noticing a Disturbing Trend
Women Leaders Share Strategies for Success »
Share